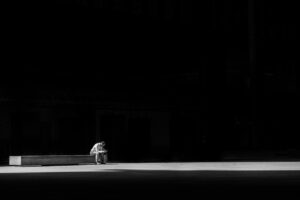 You may know one famous saying of the philosopher Jean-Paul Sartre: “Hell is other people.”

Being a philosopher, he had his own obscure meaning, but I suspect the saying has generated its own meaning in our culture. Certainly, it has popped into my mind when someone’s driving has irritated me, or when stuck on a crowded train on a sweaty summer’s day.

But what does it mean now, in the midst of a COVID-confinement? I’ve noticed two things – perhaps you can add more.

Firstly, for those who live alone, the saying is now absolute nonsense. The virus has massively increased the difficulty of connecting with other people, and it’s a deeply lonely experience being locked up with only yourself for company. Those who are suffering this isolation know that hell, in fact, is the total absence of other people.

On the other hand, for those who live with family or flatmates, the saying might feel more true than ever. Individual quirks that might be endearing normally have become deliberate attacks. Introverts and extraverts would be at each other’s throats, except that the introverts are so desperate for time on their own that they’ve hidden in a closet somewhere. And there’s no sport to talk about, so the men have run out of topics of conversation long ago. Many of us have a touch of the iwannabealonervirus!

What our enforced isolation has taught us, I think, is that we are meant to interact with each other. We aren’t made for only our own company, nor for that of only a small group of other people. We are social beings.

The Bible gets that on the table early, right at the beginning: “It is not good for man to be alone,” God says – and when you consider that at that point, Adam had the God who made the universe for company, that’s saying something. And at the other end of the story, the Bible’s picture of the future is of a city where a feast runs on through eternity. That’s why the words used to describe Jesus’ achievement on the cross that we’ve just marked at Easter are so often relational: ‘at-one-ment’, ‘reconciliation’, ‘redemption’ and ‘forgiveness’.