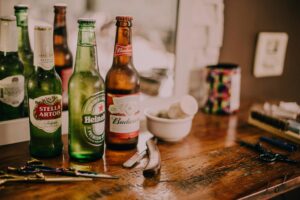 It isn’t normally all that hard to sell beer. Alcohol has a long history of popular usage, and beer has been a stayer through the centuries. But over the last few weeks, one company has found its sales are dropping at an alarming rate.

It’s no surprise: Corona beers aren’t flavour of the month. While that worries the shareholders, the rest of us should perhaps be worried about the level of comprehension in the general population that so many people could think that there’s a connection between a drink and a deadly virus.

We’ve long known that drinking can leave you with a hangover in the morning, but what we’re alarmed about right now is the result of a different form of indulgence. The world God made didn’t include diseases – or hangovers, for that matter. Disease, disaster and death were all brought into the world by our disobedience, our confidence that we could choose what was really best for us.

A big part of the marketing for Corona’s product is to associate it with summertime and days at the beach. It’s pitched as the drink that fits with paradise. That makes the analogy even stronger: when we reached for our own paradise, it failed to deliver on its promise and we lost the one God had given us.

Now we find ourselves, again, as ever, in need of rescue. A silent killer stalks the world, and we can’t hope to find a cure in time. Our efforts to keep it at bay are ineffectual. Our only hope is to turn and find a merciful God.

A God, we should acknowledge, who warned us of the first and deadliest plague.  A God who provided the only cure, to his own cost. A God who takes our side even when we try to push him away.

Corona, of course, means ‘crown’. It was Jesus who wore the first crown of suffering, and wore it to death. And that means that now, we can drink deeply of the cup of life that he offers us, or we can stick with the hangover of our clumsy stab at arranging life for ourselves. A king, or a curse – what’s your poison?