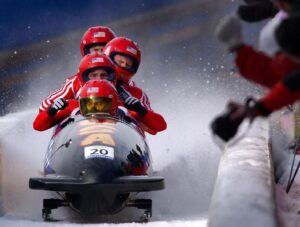 As winter settled in this year, we were meant to be looking forward to a glut of sport on our televisions. How better to stay warm and dry than to cheer the labours of others? Whether you’re a league tragic or a football purist, things aren’t as we’d anticipated. And can we stand waiting a whole extra years for the Summer Olympics?

Of course such questions are a bit foolish in the midst of a pandemic. We have greater concerns at the moment, although it is marvellous to see the light at the end of the tunnel as restrictions begin to be unwound.

It turns out that the big sporting event this year has only two teams competing: a sneaky little virus, and the human race. And the coronavirus not only got to kick off, but it was the only team that got to train together before the match. No wonder it was able to open up an early lead.

And now it’s the second half of the game, and it looks like the momentum may have shifted our way. At least we hope so – the game isn’t over yet, and it certainly feel like extra time is looming.

What has been remarkable is the degree of teamwork that humanity has shown. We have adapted rapidly, all over the planet, to significant changes in the way we live, work, and relate. We are far from perfect in this, but it’s still been amazing to witness international cooperation on this scale.

But will it last? Already we see signs of impatience from individuals and from nations. Party politics appear to be stamping down bipartisanship. We’re relaxing before the final whistle. Even when it’s quite literally a matter of life or death, we can’t quite bring ourselves to commit to one another.

It’s only been done once before, and even then, only by a single person. The Bible tells us how Jesus laid aside his glory, his power, his comfort and his rights in order to die for us. It was a matter of life and death then, too: his death, for our life. And that, it transpired, was the victory for us all.