As We Forgive Others

At my induction just over a month ago we were introduced through the preacher to two people Jesus had something to offer. Simon was the name of one and the other was nameless. Simon had notoriety while the unnamed woman was simply notorious, “she was a sinner”. To the woman Jesus offered something she couldn’t imagine receiving, while to Simon he offered something he failed to see the depth of his need for.

What am I talking about? The forgiveness of debt. Not just any kind of debt but the kind a person owes God and has nothing in their bank to offer repayment for. It’s not a monetary debt but a relational one. The kind that has all the potential for harboured resentments and bitterness against those who have caused offence by their damaging behaviour. We know the kind. It’s the kind that divorces marriages, shuns family and writes off friendships. But in this case it is the debt that separates us from God. We call it “sin”.

Apart from the fact that money is often a cause for an unforgiving spirit, it is interesting that Jesus used a banking illustration to make his point. Listen!

“Simon I have something to tell you…Two people owed money to a certain moneylender. One owed him five hundred Denarii and the other fifty. Neither of them had the money to pay him back so he cancelled the debt of both. Now which will love him more?”

Well how would you answer the question? Simon said it was the one with the bigger debt and that makes sense, but…

Consider Jesus words, “Neither of them had the money to pay him back.” In other words the distance between the moneylender and the debtors was actually the same. Both owed debts and both could not repay. You know, the distance between God and the woman described as a sinner and Simon was exactly the same. Unable to pay their debt the distance between them and God was an insurmountable one. She may have been a brothel worker while he may have been the local solicitor, she the prostitute and him the high school principal. She may have commodified her body while he sold commodities on the Exchange, but…They are worlds apart these two, but both their lives measure exactly the same distance from Heaven. An insurmountable distance that only the mercy, the grace, and the love of a forgiving God could overcome.

Not many in our community be it church or the Heads would probably see themselves as notorious sinners but the real problem is that many don’t realise that even their little sin is a debt beyond their ability to pay. 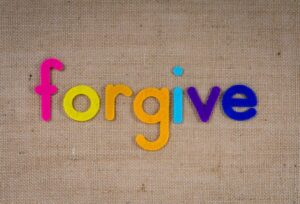 When Jesus taught us to pray what we call the Lord’s Prayer, he included a permission for all of us to ask God in heaven to “forgive us our sins.” In fact he went further than that to be the answer to that very prayer. His crucifixion saw Him take the debt of our sins on himself and in his death transacted our forgiveness – the perfect life a sacrifice sufficient under the judgement of God to cover the debt of all.

The beauty of this transaction of love really defies description. IT was costly to forgive debt. It required sacrifice and suffering with a view to providing something much better. It was undeserved and a surprising relief to anyone prepared to admit they need God’s forgiveness. For the unnamed woman it issued in her showing an extravagant love for Jesus, the saviour of her life.

I think when it comes to the Lord’s prayer it’s that extravagant love that we see in the words “as we forgive those who sin against us” or “as we forgive our debtors”. A grace received should produce grace given. It is difficult to see how we who have been forgiven so much by God could then act toward others who have hurt us, without grace. From those forgiven much, much will be expected. Of course the grace of God that sets you free has a power to so change a person that the setting free of others by forgiveness becomes a passion.

John Stott in his book “Confess your sins” quotes the head of a large British hospital: “I could dismiss half my patients tomorrow if they could be assured of forgiveness”